like all other living beings man struggles for existence. But while the lower being struggles without any cognitive effort...
Nikita Kumari

Satishchandra Chatterjee & Dheerendra Datta in their book - 'Introduction to Indian philosophy' said that — like all other living beings man struggles for existence. But while the lower beings struggle without any cognitive effort; Man is acquainted with a plan (reason), purpose (emotions) and instincts. Instincts, emotions and reason are the three tools of man in his struggles in this regard. He wishes to lead his life in the light of the knowledge of himself and the world, taking into consideration not merely the immediate results of his actions, but even their far-reaching consequences. Desire for knowledge springs, therefore, from the rational nature of man.

Philosophy in Greek means 'love for knowledge'. Darśana is the term used for Philosophy in sanskrit meaning 'the vision of truth' aiming at the knowledge of truth'.

Philosophy is a systematic study of truths and relationships of man with the world, giving meaning to his existence.

"Man lives in accordance with their philosophy of life, their conception of the world. The choice that is given to us is not between some kind of metaphysic and no metaphysic, it is always between a good metaphysic and a bad metaphysic". – Nobody is untouched with philosophy.

Italo Calvino once said – " Folk tales are told and retold so many times that they become like pebbles, smooth, shiny and perfect."

People may mistake philosophy to be originated from the words of mythological intellectuals. Having said that chances are that Indian philosophy often called 'Hindu Philosophy' can be ill-judged to belong to a particular religious sect of Hinduism. 'Hindu' here refers to Indian - geographically and not the Hindu religion.

In Indian literature, philosophy is classified into six systems: 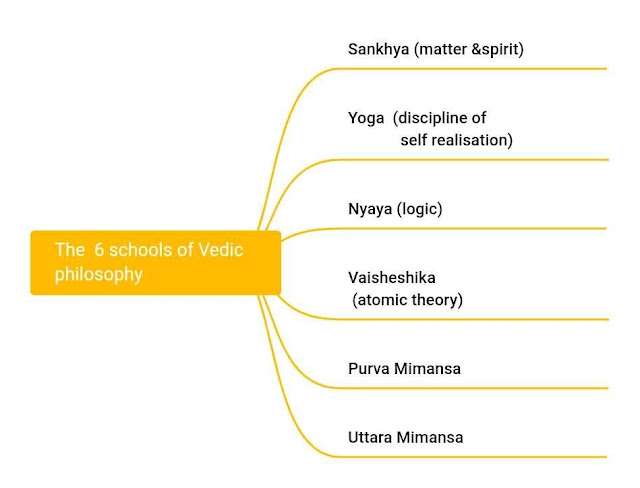 The first system of philosophy based on {vedic scriptures} of the śad-darśanas is the Sankhya darśana. It is a discipline of Philosophy that deals with the matter i.e., the world and the spirit. It was scripted by Kapila muni.

'Yoga' means discipline. So, yogdarśana is all about practising discipline in life which would ultimately lead to self-realization. Patanjali was the curator of this philosophical school. Yoga darśana is also Veda - based system.

'Nyaya-darśana' too is a theist school of philosophy; i.e; based on Vedic scriptures. Gautam muni was the preacher of this darśana.

'Vaiśeśika-darśana' was first developed by Kanada muni. It is a theism-based system.

[Note: Theism is a concept of Life after death, it doesn't have anything in regard to belief in God]

The last two of the orthodox darśanas are Purva mimámsá and Uttara mimámsá. They are typically called mimámsá and Vedántá. These were written by Jaimini and his guru Bádráyaná respectively.

With a minuscule difference, philosophy has been the same in the east and west. Though the conclusions or sidhántá are identical but the method of enquiry varies. In India and Europe, the problems of man are discussed by different branches of philosophy – Metaphysics, Ethics, Logic, Psychology and Epistemology. The only difference is that Europe treats a problem by its respective branch of philosophy while India treats an individual problem with all the approaches (metaphysical, ethical, logical, psychological, epistemological).

Books to guide beginners in philosophy

Philosophers all over the world have a unique say in regard that the main aspect of philosophy is to break the two main hurdles in the path of leading a happy life - 'fear' and 'pleasure'. Our society conditions us in a way that we chase pleasures and run away from our fears. Philosophy unveils the truth; it says that to lead a happy life you have to make it simple, where you're more connected with nature and less connected with pleasures and fears. But, most people find it difficult to lead a simple life. The remedy is - go for instincts breaking the chains of conditioning.

If you're a beginner in studying philosophy go for the books:

“All the powers in the universe are already ours. It is we who have  put our hands before our eyes and cry that it is dark.”

“Death is not extinguishing the light; it is only putting out the lamp because the dawn has come.”

“The argument advanced by the supporters of the theory of hereditary transmission does not furnish a satisfactory explanation of the cause of the inequalities and diversities of the universe.”

“Don't shy away to detach yourself from the world; dettachement from the wordly affairs is the key to self-realization”